When we first met this Filipina woman, we were shocked to learn that she lived with her husband, five children, and eight grandchildren—all under the same roof.

Adelaida used to sell vegetables and fish, but due to health issues and stomach surgery, was no longer able to carry heavy items or do her job. Her husband also had no steady income.

It was a difficult financial time for Adelaida’s family.

Thankfully, that’s when Adelaida began to work for her local church, which runs a livelihood project supported by Work of Your Hand. Her sewing skills allowed Adelaida to sew environmentally friendly, sturdy bags that we now sell in the Western world. Today, her wages are now the family’s major source of income.

We’ve repeatedly visited the Philippines, and have seen first-hand the difference that a fair, steady wage can make for an impoverished family:

• In 2010, Adelaida had saved enough money to purchase a washing machine; that meant she no longer hand washed clothes for 15 people.
• In 2012, wages from her sewing were providing her family with electricity and water
• In 2013, we learned that Adelaida’s husband had suffered a stroke; she told us how grateful she is for savings that can now purchase nutritional drinks to aid his recovery. She also shared with tears in her eyes that because of her employment, she can provide for her family—even in times of crisis. And last but not least, Adelaida has since built a wall in her home, so that her family can have more privacy while living together.

Thank you for partnering with impoverished people like Adelaida. You’ve joined a movement that is truly changing lives, one purchase at a time. 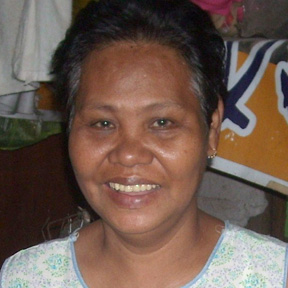